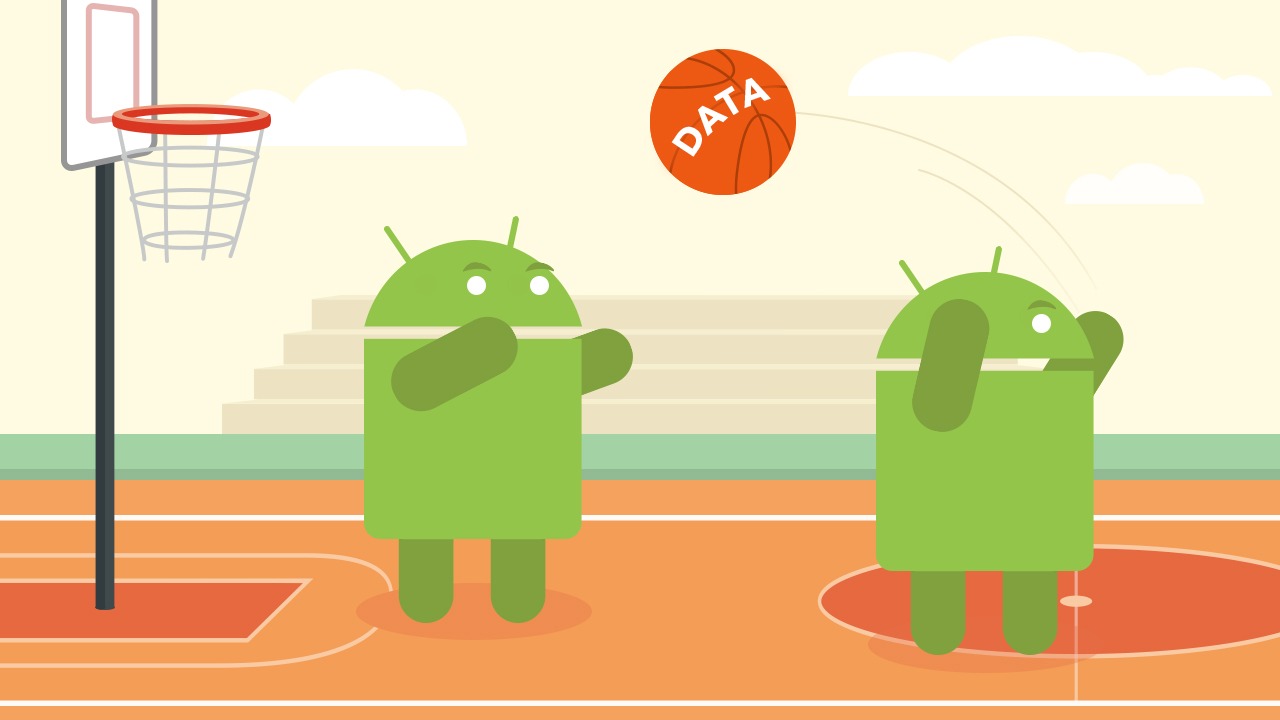 When you navigate within your Android application, you usually just switch to the next screen. In some cases, when you need to pass data to that screen, the navigation involves specifying additional parameters. As I explained in the previous post about navigation in Android apps, the “next” screen doesn’t need to “know” or “assume” anything about the “previous” screen to support this scenario.

However, in some cases, you need to navigate back from the “next” screen to the “previous” one and return some kind of data to it. For example, you might have a dedicated screen in your application for choosing an image. This screen will be navigated to from several other screens, and when the user chooses an image, the previous screen should be brought from the backstack and notified of user’s choice.

In this post, I’m going to describe several approaches that you can use in your Android application to return data to previous screens.

The oldest and the most widely used approach to pass data to the previous screen is to call startActivityForResult() method:

Then, in the next Activity, when you want to return data to the previous screen, you do something along these lines:

After SecondActivity finishes, FirstActivity will be popped from the backstack and its onActivityResult() method will be called:

The above approach works when executed from Activities, but requires a bit more care if you implement your screens using Fragments. To get onActivityResult() callback inside Fragment, make sure to follow the following guidelines:

So, that’s the most popular way to pass data back to the previous screen, but I rarely use it myself.

See, using Intent for data transmission introduces quite a bit of semantic coupling between screens because they’ll need to be in sync with respect to the keys and the types of data used in that Intent. This kind of coupling is obscure and difficult to understand. In addition, if you’ll want to have unit-testable controllers for your screens, you’ll want to unit test the logic that both puts the data into that Intent and retrieves it on another screen. However, unit testing Intents is tricky, and I surely don’t want to introduce Robolectric just to make it simpler.

All these issues stem from the fact that startActivityForResult() mechanism is intended to be used for IPC communication. In other words, the started Activity doesn’t necessarily belong to the same process, so this mechanism should be very generic. However, when you start Activities within your own app, they’ll run in the same process. Isn’t there a simpler and safer solution for these situations? Yes, there is!

If the next screen is implemented using Fragment, startActivityForResult() won’t help. In this case, you’ll need to use setTargetFragment() API when you navigate to the next Fragment:

FragNavController object used for the above navigation is part of FragNav library described in my previous post.

Then, inside SecondFragment, you can get a reference to the previous Fragment in this manner:

At this point, you can either manually call onActivityResult() on the previous Fragment:

or cast it to a more specific type and call a custom method:

Most examples of using target Fragments you’ll find on the internet will just call onActivityResult(), but I don’t think it’s a good idea.

See, during the standard Fragment’s lifecycle, onActivityResult() will be called after onStart(). This means that the Fragment receives this callback when it’s in “active” state. However, if you just directly call this method from another Fragment, chances are that the previous Fragment will be backstacked and stopped. Therefore, you’ll be invoking onActivityResult() “spuriously” in respect to standard Fragment’s lifecycle. You can make this work, but it’s risky.

For example, if you’d like to perform additional navigation in response to this event, then your application will crash with the notorious IllegalStateException, unless you use “allow state loss” flag. However, even if you do use that flag, you’ll be invoking navigation to the next screen before you returned from the “current next” screen. Again, you can make this work, but these are the kind of hacks that lead to very subtle and difficult bugs in the future.

On the other hand, if you cast the target Fragment to a more specific type, you immediately introduce strong coupling to the previous screen. Then, if you’d like to navigate to that SecondFragment from additional screens in the future, that wouldn’t be possible.

One way to mitigate this problem is to use callback interface that previous Fragments will need to implement:

This approach is cleaner, but it still falls short of my definition of clean design. First of all, it perpetuates inheritance abuse which is so common in Android framework. Second, there is still no way to pass data back directly to a standalone unit testable controller (if such a controller is implemented on the previous screen). Third, if I’d want to refactor one of the previous screens to be Activity, this approach would require modifications in many places.

All in all, passing data back between Fragments using the “standard” approach isn’t that simple either, and is actually quite dirty.

Until now, I described two main approaches that you can use to pass data to previous screens from either Activities or Fragments. Both of them work, but they’re too complicated for the task at hand and introduce some unhealthy coupling into your application.

In my opinion, the situation around startActivityForResult() and setTargetFragment() is similar to the case of broadcasts in Android. If you need to send a system-wide broadcast outside of your app’s process, BroadcastManager is perfectly alright. However, the same API for intra-process communication, LocalBroadcastManager, was a total disaster. At some point, even Google realized that and Jetpack’s page about LocalBroadcastManager basically says: “don’t use this class”.

Inside your application you usually want to use simple method calls that take your own data structures as parameters, as opposed to Android’s Intents, Bundles, etc. Can we achieve something like that for this use case of passing data back to previous screens? Yes, we can.

In my applications I pass data back to previous screens using a dedicated global object. Global here means that one instance of this object will be shared among all clients. Like Singleton, but without static calls. Let me show you how this approach works, combined with ScreenNavigator abstraction described in the previous post.

Inside the original Fragment, Activity or standalone controller I’ll call one of ScreenNavigator’s method, passing “async completion token” string as a parameter:

Async completion token is a general name for a widespread design pattern. When you use this pattern, you simply designate async call with an ID and then pass that ID alongside other information to an async API. This ID isn’t used during the call, but later returned to the caller when the async operation completes. Then the caller can distinguish between different async notifications of the same type. For example, request code parameter passed into startActivityForResult() is also an async completion token.

Then, on the next screen, once the user chooses an image (for example), I’ll put the information about user’s choice into my global object and navigate back:

After the previous screen will be brought from the backstack, in its onStart() method (or an alternative method, like Conductor’s onAttach()), I’ll do the following:

That’s all. I’ve just passed the data back to the previous screen in simple, explicit and type-safe manner. The only coupling that I introduced is the assumption, made by the previous screen, that the next screen will put a specific type of data into that global buffer.

Have you noticed the big architectural benefit of this approach? It’s completely independent of implementation details of both the previous and the next screens. You can use either Activities, or Fragments, or whatever, and this approach will work exactly the same in all situations. In addition, it’ll be very easy to unit test the controllers that will use this buffer if you’ll want to do that. Lastly, since you control the implementation of this buffer, you can implement advanced debugging and logging strategies inside it. For example, you can fail-fast and throw an exception if developers make mistakes in the future and try to get data from the buffer using non-existent async completion token.

All in all, this is a very simple technique which, nonetheless, brings some major benefits into your codebase.

Now I’m forced to complicate the simple picture I drew in the previous section with a bit of a nuance.

Since the aforementioned buffer is global, it’ll be preserved on configuration changes. However, since it keeps the data in-memory, it’ll be cleared on process death. Therefore, if process death will occur after the next screen pushes data into the buffer and before the previous screen retrieves it, that data will be lost.

To avoid losing data due to process death, you need to make sure that you put it into the buffer right before a call to navigate back, and retrieve it from the buffer in the subsequent onStart() callback of the previous screen. This worked for me flawlessly so far. However, if you want to be on the safe side, you might want to either implement persistent caching, or make sure that you preserve buffer’s contents across process death by delegating onSaveInstanceState() and onRestoreInstanceState()to it.

In my experience it wasn’t a major complication, but it is something that you should keep in mind.

Following my two previous articles, several developers asked me about how I pass data back to previous screens, so I decided to do a short post on that. However, as is often the case in Android, something “simple” that we’re accustomed to, can be quite messy to unpack. With all the nuance and details, this post ended up being another deep-dive.

I showed you how I address the cases when I need to pass data back to previous screens in my applications. When I need to reach out to external apps (e.g. camera app), I just use the standard startActivityForResult() and don’t even try to make it part of my ScreenNavigator. After all, these scenarios are relatively rare, so I’m alright with treating them as exceptions.

Edit: several readers asked about using Activity-scoped ViewModel to exchange data between Fragments. I shared my opinion about that in this Twitter thread.

Thank you for reading and don’t forget to subscribe to my newsletter if you liked this article.

12 comments on "Returning Data to Previous Screens in Android Applications"